Value of Old Banknotes from The Union Bank of Newfoundland in Saint Johns, Canada

Old Money from The Union Bank of Newfoundland in Saint Johns

These early bank notes are denominated as one pound, two pounds, five pounds, and ten pounds.  There is no mention of dollars on these bank notes.  Perkins, Bacon and Co. London handled the printing responsibilities for The Union Bank of Newfoundland.  Dates include May 18 1854 and 1st March 1855.  Jno. W. Smith, Rob’t Prowse, Ewen Stable, and Lawce O’Brein could have signed these bank notes.  One pound notes are rare.  All higher denominations are even rarer.  We are showing a proof/specimen note below.  These are usually available for around $1,000.  Issued bank notes (with signatures and a serial number) would be worth much more money. 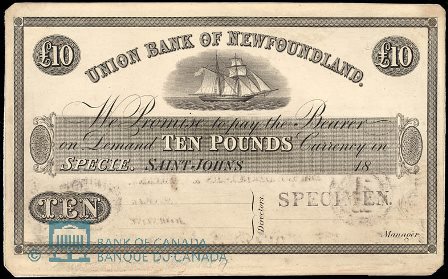 Currency from 1882 and 1889 is grouped together because all of it was printed by The American Bank Note Co. New York; all notes were signed by C.S. Pinsent and James Goldie.  Two dollar bills are the only bank notes dated as 1st May 1882 and they each have a portrait of John W Smith.  Five, ten, twenty, and fifty dollar bills are dated as May 1st 1889.  Generally speaking, as the denomination gets higher, so does the value.  These notes are by far the most popular with collectors of any currency issued by The Union Bank of Newfoundland.  The colors and interesting engravings are a nice break from ships, seals, and codfish.  High grade examples of $2, $10, and $20 bills are out there.  We would love the chance to purchase any 1882 or 1889 bank notes.  Please offer if you have something for sale.

We buy all types of Canadian currency.  We are especially interested in bank notes from The Union Bank of Newfoundland in Saint Johns.  You might be surprised at how much money we can offer for some currency.  We frequently pay thousands of dollars for nice examples.  Send us an email with pictures of the front and back of your bank note and we will respond quickly with our offer.

Your piece of currency from The Union Bank of Newfoundland in Saint Johns could look similar to the one seen below.  Don’t worry if yours is different because other denominations and designs were used.  Richly colored bank notes are always popular.  Contact us for more value information.