Value of Old Banknotes from The Dominion Bank of Toronto, Canada

Old Money from The Dominion Bank of Toronto

The Dominion Bank (not to be confused with Dominion of Canada currency) was established with its headquarters in Toronto in the year 1869.  It did not open for business until 1871.  That same year it opened another branch in Toronto, five more branches outside of Toronto, and it issued bank notes for the first time.  In 1955 when The Dominion Bank merged with The Bank of Toronto it had 194 branches.  From 1869 to 1955 it never once bought another bank.  It simply grew through sound management and responsible financial policies.  The bank still exists today as The Toronto-Dominion Bank.  Of course we are more focused on bank notes from this institution.  See our guide below for more details about it paper money issues.

The British American Bank Note Co. Montreal & Ottawa printed the first bank notes for The Dominion Bank.  They can be dated as Feb. 1st 1871, May 1st 1871, or 1st October 1873.  The bank issued $4, $5, $10, $20, and $100 bills.  Each note has the engraved signature of J. Austin on the right hand side of the note.  The first thing we need to mention is that 1871 $4 bills are frequently found as counterfeits.  Authentic four and five dollar bills are scarce but occasionally available.  Those two denominations feature Prince Arthur and Queen Victoria, respectively.  All other denominations are very rare.  Please contact us for pricing details.

Records suggest that more than five million ten dollar bills were issued by The Dominion Bank between 1900 and 1925.  They are dated as Jany 2nd 1900, Jany 3rd 1910, and 2nd Jany 1925.  There are six different varieties based on the year, signature combination, and title.  We would be happy to provide specific free appraisals.  We can tell you that notes from 1900 are the rarest and $10 bills from 1925 with the Austin signature are the most common.

These bank notes were printed by both The American Bank Note Company, Ottawa and The Canadian Bank Note Company, Limited.  The engraved dates of issue are 1st October 1897, 1st October 1909, and 2nd January 1925.  Twenty dollar bills from 1897 are very rare.  The same notes dated as 1925 have values that start at about $300 and go up from there based on their condition.  All told, about one million $20 bills were issued by The Dominion Bank between 1897 and 1925.  The man pictured on the right hand side of each note is Frank Smith.

These are beautiful high denomination bank notes and they all aren’t prohibitively rare.  Less than 200,000 were issued by The Dominion Bank.  These $50 bills can be dated as 2 January 1900, July 2nd 1901, or 2nd Jany 1925.  High grade examples are scarce.  There are four different varieties out there.  Please contact us for pricing details.

The Dominion Bank issued five and ten dollar bills dated as 2nd Jan. 1935.  These notes are common.  Their value is based purely on their condition.  Values range from about $40 to $600.  Dudley Dawson and Clifton H. Carlisle are pictured on and signed each bank note.  These notes may be common, but they are still very attractive in high grades. 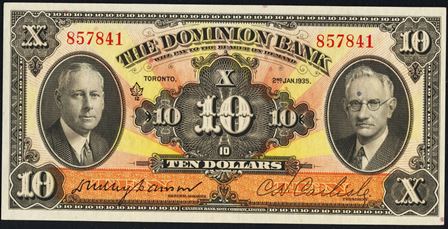 Robert Rae and Clifton H. Carlisle have their engraved portrait on each 3rd Jan. 1938 $5 and $10 bill.  Each man’s signature also appears on these bank notes.  These are common notes.  Values range from $40 to $600 based purely on condition.  These are commonly called small size notes because 1935 and 1938 notes are physically smaller than previous notes issued by The Dominion Bank.

We buy all types of Canadian currency.  We are especially interested in bank notes from The Dominion Bank of Toronto.  You might be surprised at how much money we can offer for some currency.  We frequently buy these notes at recording setting prices.  Send us an email with pictures of the front and back of your bank note and we will respond quickly with our offer.

Your piece of currency from The Dominion Bank of Toronto could look similar to the one seen below.  Our guide above has images of most of the bank notes the average collector or dealer is likely to encounter.  Contact us for more value information.