Value of Old Banknotes from The Bank of Montreal, Canada

Old Money from The Bank of Montreal

The Bank of Montreal first opened in 1817 using the title The Montreal Bank.  In 1822 it changed its name to The Bank of Montreal.  The bank is still open today.  The bank is important not only because of its longevity, but it was also the first permanent bank in Montreal.  It was a forerunner of branch banking in Canada.  It opened a New York office in 1859; a London office was open by 1870.  The Bank of Montreal was able to grow through acquisition and expansion.  Its role as the banker for the government certainly helped the bank survive leaner years.  Lots has been written about the history of the bank, but we are focused on its bank note issues.  Our guide below has lots of information.  Please contact us if you need a free appraisal or you are looking to sell.

We are taking a big shortcut by grouping everything from 1861 and earlier into one group.  The Bank of Montreal issued many different denominations and varieties in the early days of its existence.  We are skipping these simply because they are old enough to the point that the average person is not likely to find one.  Furthermore, they are not traditionally the most popular bank notes from The Bank of Montreal.  If you have something from this time period then just contact us directly.  We can let you know what it is worth.

The American Bank Note Co. printed one, two, five, and ten dollar bills dated as 1 Aug. 1862 for The Bank of Montreal.  These can be signed by C.G. Brown or R. Angus.  There are several varieties to this issue based on whether or not the bank note has a branch name added.  Branches include Brantford, Goderich, Kingston, London, Montreal, Picton, Quebec, and Whitby.  One dollar notes show Queen Victoria.  Two dollar bills have engraved portraits of both Victoria and Albert.  Robert Peel is featured on the ten dollar bill.  Generally speaking, one and five dollar bills are occasionally available.  Two and ten dollar bills are very scarce in any condition.

The Bank of Montreal issued five, ten, and twenty dollar bills dated as 2nd January 1882 or Jany. 2nd 1882.  Each note is signed by and has a portrait of C.F. Smithers.  W.J. Buchanan is featured on the ten dollar bill.  These are rare bank notes.  All denominations exist, but the $20 bill is definitely the toughest to locate.  Please contact us for exact pricing details.

We have a lot of information about Jany. 2nd 1891.  We know that each bank note was printed by The American Bank Note Co. N.Y. and signed by Donald Smith.  Smith is also featured on each bank note.  Printing total looks like this:  460,000 – $5 bills, 236,000 $10 bills, 52,000 $20 bills, and 11,000 $50 bills.  You can use that information to infer than $50 bills are probably very rare and that $5 bills are the most common notes from that bank.  That information is accurate.  Ten and twenty dollar bills have similar rarities.  Edw. Clouston is on each five and twenty dollar note.  Geo. Drummond is on the ten and fifty dollar bill.  There are also lots of proofs and specimens out there.  Proofs don’t have a serial number and specimens have an all zeros in the serial number.  Both proofs and specimens are worth less than issued bank notes.

The Bank of Montreal only issued $50 and $100 bills in 1892.  These were all printed by The Canada Bank Note Co. Montreal.  Both denominations are dated as Jan. 2nd 1892 and signed by Donald Smith.  These are very rare today.  Please contact us if you have one available for sale.

These are some really exotic bank notes!  They are twice as big as other Canadian bank notes from the same time period.  These were printed by Waterlow & Sons, LD London Wall, London for use by The Bank of Montreal.  The colors and vignettes are simply stunning.  The bad news is that these bank notes are very rare.  Should you be lucky enough to own such a note then please contact us for exact value information. 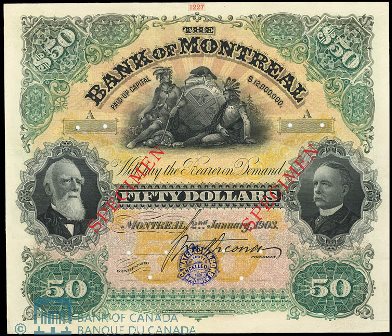 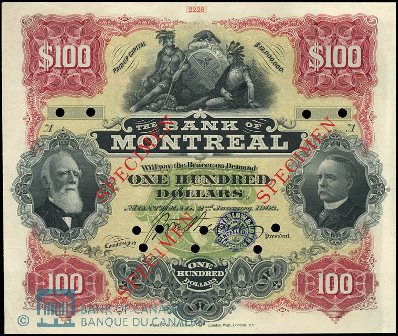 1904 marks the first year that a denomination set from The Bank of Montreal is feasible and affordable.  The American Bank Note Company, Ottawa printed five, ten, and twenty dollar bills dated as 2nd January 1904.  Each design is very similar with E.S. Clouston and Geo. Drummond shown on the front of the bills.  About 3.9 million five dollar bills were issued.  Another 2.8 million $10 bills were printed.  Only 252,000 $20 bills were issued.  All denominations are scarce in AU and uncirculated grades.

Five and twenty dollar bills were issued by The Bank of Montreal in 1911.  Each note is dated as 3rd January 1911.  E.S. Clouston and R.B. Angus are pictured on the front of these bank notes.  R.B. Angus also signed each note.  Records show that 800,000 1911 $5 bills were printed.  Only 80,000 twenty dollar bills were issued.  Needless to say, $20 bills are definitely rarer than $5 bills.  We included a proof note as the five dollar bill image below.  An issued bank note would have signatures and a serial number.  Please contact us for exact values.

All Nov. 3rd 1914 bank notes from The Bank of Montreal look similar to each other.  Sir Frederick Williams-Taylor is pictured on the left hand side of each note.  Vincent Meredith is on the right hand side of each note.  The bank issued $5, $10, $20, $50, and $100 bills.  Each denomination has two varieties based on whether the signatures are types or signed.  Millions of 1914 five, ten, and twenty dollar bills were issued.  204,000 $50 bills were printed and 88,000 $100 bills were printed.  All denominations are readily available.  Values fluctuate based on the actual condition of each bank note.

These bank notes can be dated as 2nd January 1923 or Jan. 2nd 1923.  Sir F. Williams-Taylor and Vincent Meredith have their signatures and portraits featured on the front of each 1923 bank note.  The lower denominations ($5, $10, and $20 bills) are very common in circulated conditions.  The two high denominations are scarce in any grade.  Fifty and one hundred dollar bills were not printed until 1926 and they were printed in very small quantities.  The exact value of any bank note is based on its technical grade between 1 and 70.  The nicer the note is, the more money it should be worth.

The Bank of Montreal issued the same five standard denominations in 1931.  Depending on the denomination, each note could be dated as 2nd January 1931 or Jan. 2nd 1931.  C.B. Gordon is pictured on and signed each bank note.  W.A. Bog is shown on $5 and $100 bills.  Jackson Dodds is on the other denominations.  Millions of $5 and $10 bills were issued.  Relatively small quantities of $20, $50, and $100 bills were issued.  The three high denominations have values that start at about $500.  Five and ten dollar bills are usually common.  Some $5 bills are rare if they have a serial number that starts with a C or S.  Contact us for exact pricing information.

Each 1938 $5 bill from The Bank of Montreal is dated as 3rd January 1938 and has a portrait and signature of Jackson Dodds.  Ten and twenty dollar bills are signed by G.W. Spinney.  Spinney is also featured on $10 and $20 bills.  C.B. Gordon is pictured on and signed all denominations from 1938.  All of these bank notes are common.  Pricing just depends on the grade.

The Bank of Montreal only issued five dollar bills in 1942.  Each note is dated as 7th December 1942.  B.C. Gardner and G.W. Spinney are shown on the front of each 1942 bank note.  This marks the last year that The Bank of Montreal issued paper money.  These are actually worth decent money considering they really aren’t all that old.  Prices start at $100 and go up from there based on condition and serial numbers.

We buy all types of Canadian currency.  We are especially interested in bank notes from The Bank of Montreal.  You might be surprised at how much money we can offer for some currency.  We happily answer all inquiries.  Send us an email with pictures of the front and back of your bank note and we will respond quickly with our offer.